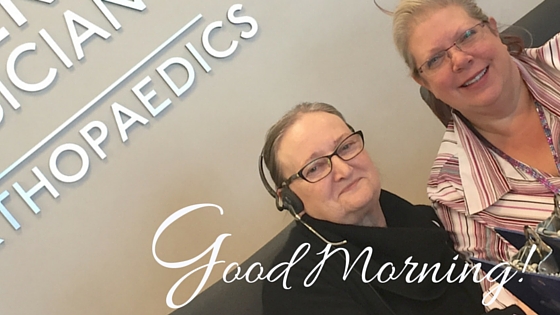 I entered the building where I was to have the MRI for my aching back, pounding the snow from my boots. Intent upon loosing every last piece of slush, I was interrupted when I heard someone call out, “Good morning!”

I looked up to see two women sitting at the front desk in the lobby. One was chatting away on the telephone—busy with another client, but smiling and waving at me. The other just sat, grinning. Grinning at me, her headset atop her head like some wild tech-headband. Then she exclaimed again, “Good morning!”

I smiled back. How could I not?

Turns out, the one on the phone—Barbara—had been the woman I’d actually spoken to the day before when I was trying to get the test scheduled in the first place. I’d let my lower back pain go on way too long and Barbara was willing to go the extra mile, listening to my laments, vowing that she could find me an appointment for the test much sooner than the computer indicated I’d be able to.

And by George, she did!

I don’t know if Barbara had jotted down a little note next to my name in the appointment roster or what, but as I walked toward them, Barbara stopped waving and mouthed “Hi, Pam!” (since she was still on the phone) “Joan will check you in!” Joan, the one who’d greeted me—twice—with her very cheery Good mornings.

“You both made my day today!” I said to Joan. To have been remembered? To be called by name? To be welcomed so kindly? Wow!

“Oh, we try! You know? I was a school teacher for many, many years and I never could understand the people who would just walk by each other and never say anything! You may not even be friends and it’s not like you have to go out for breakfast together…but, in the morning, just say, ‘Good morning!’ I don’t understand people who can’t even say Hello!”

When my test was over and I was heading out, I was happy to see the gals hadn’t gone to lunch or anything yet. I wanted to take their picture. I told them that I might write about them—that they were inspiring, that their cheeriness was contagious and such good medicine.

Then they both laughed and happily posed.

I have no idea what motivates Barbara’s or Joan’s actions, but that day I experienced the impact of being welcomed. And every day since then when I pass their desk on my way to or back from physical therapy, we just chat a bit.

It’s nice. It’s inviting. They are so kind.

Some may say, “Well, that’s their job!” They would be correct. But Joan and Barbara are doing it exceptionally well. So well that I hope I’ll see them each time I open the door.