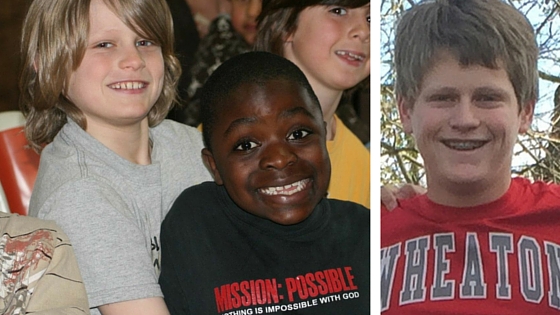 During dinner one night right after Christmas break, our fifteen year-old son, Joseph, announced that he and his gym-class teammate had lost their physical education round-robin-tournament championship badminton match earlier that day.

He jokingly added, “I led us to the finals, and then we got creamed.”

His dad (all about sports competition, of any sort) asked, “Who was your partner?”

“This other kid named Joe.”

“Did you get paired up with him?” Code for: surely that was the reason for the loss. The strong got put with the weak.

“Why didn’t you choose someone better?”

“‘Cuz I knew he wouldn’t get chosen. Joe doesn’t have a lot of friends.”

At this point in the conversation, I really started to listen.

Here he goes again, I thought. Ever since he came home and first told us about his new friend, Erick, a recently re-settled refugee from East Africa who had just arrived in his first grade class, our Joseph has demonstrated a soft heart and a keen eye for people.

Later on, I decided to ask our Joe what made him notice “the other” Joe.

“Hmmm. Possible to elaborate?” Our Joseph is a man of few words.

“He didn’t have a lot of friends.”

“How did you know that?”

“ ‘Cuz he doesn’t talk to lots of kids and when kids do talk to him they make fun of him.”

“How did you know that?”

“How often did you see that?”

“When you noticed it the first time, what did you do?”

“I didn’t really do anything. But then it just kept happening so I included him.”

“How did you know it just kept happening?”

It was pretty clear that I wasn’t going to get too much more out of Joe and, quite frankly, I’m not really sure what exactly I was after, except that there had to be something more to learn! And could a freshman boy provide the wisdom?

Or had he already?

When I pressed further, he could only respond—and now he was getting impatient with me: “I just saw, mom.”

Well then. There you have it.

Today, will you choose to just see? Turn your head away from your computer monitor, lift your gaze from your phone, peek outside your cubicle, set aside your book on the way home on the train, look into the eyes of the person you’re actually talking to, and see.

And from there, just imagine what could happen.