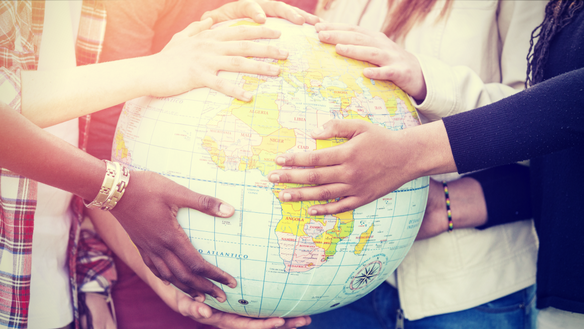 God could see what was coming even before creating a single atom or a piece of dirt or one star, so he made a plan. This plan, centered in Jesus Christ, is to make us whole again, to redeem the entire creation, to restore shalom.

God made the world with this focus.

People
If we read the Bible carefully, this mission appears on every page. And people have always been central to it. God blesses people, comes to people, and reaches out to people in order to build a people who will join him in carrying it out. God doesn’t bless people so that they can be more spiritual or have a great life for themselves–though these might very well be results. He blesses people so that they can participate in his work of restoration.

Anticipation
Over 4,000 years ago when God called Abraham, he told him that he would be blessed so that he could bless others. The covenant that God makes with Abraham and Sarah is with his mission in mind.

Later in Exodus, God meets with their descendants at Mount Sinai (Exodus 19), telling this people–Israel–who has grown in number exponentially, that they would collectively become a holy nation, and that each individual would be of royal priesthood. What is a priest’s job? To represent God to others, showing others what God is like. With this pronouncement, God is developing a people who will help the world understand and encounter him.

In Isaiah 61, God further explains his mission: To proclaim good news to the poor, to bandage broken hearts, to proclaim freedom for those in captivity, and to release people from the prisons the enemy has locked them in. He goes on to call his people rebuilders, restorers, and renewers of “places long devastated.”

Training
And as Isaiah prophesied, the mission continued with the incarnation of the ultimate rescuer, Jesus. Is it any surprise that he would continue working in the same way as his father? Jesus chooses more people knowing that this is how his Father works. But does Jesus call out to them to follow him so that they can be more spiritual or become more biblically literate or be better parents or sons or better at their careers? All of this might have happened, but Jesus is clear with his very next invitation: “I will make you fishers of men.”

Jesus’ call to his first disciples is a call to be trained to participate in the mission of God by walking right alongside them as their rabbi, teacher, and mentor.

Participation
“You will be my witnesses,” he tells them later. Not that they might be or could be, but that they will be. By saying this. Jesus is basically saying, “So when people want to know what I am like and what I am up to, they will look to you as witnesses. They will expect to find the truth about me from you.”

In 2 Corinthians 5, followers of Jesus’ way–that first, early church–are called Christ’s “ambassadors” to whom he has given “the ministry of reconciliation” (verses 18-20). Just as he always has, God is continuing to make his appeal to the world through us.

Our turn
We all know Jesus’ final instructions: “Go and make disciples of all nations, baptizing them in the name of the Father and of the Son and of the Holy Spirit, and teaching them to obey everything I have commanded you” (Matthew 28:19-20).

To be a disciple of Jesus is to join God on his mission.

How many of our people know they are sent?
How many have heard this call?
How can you help them know and equip them for the Mission?