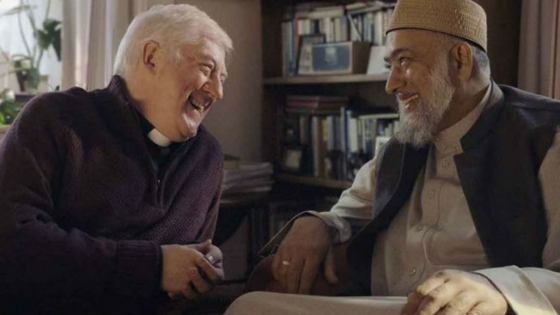 In early November, Amazon released a new television commercial depicting a positive relationship between two friends sharing a cup of tea, some conversation, and a few laughs. One is Muslim, the other is Christian, and both are clerics. Together, they hit a viral chord, warming the hearts of many with a positive message that good conversations can occur between those who believe differently.

Sure, the TV spot was actually about sending holiday packages with Amazon Prime, but, as good marketing does, the corporate selling giant was genius in getting us there by addressing a felt need and matter of the heart: that people want to connect and understand one another. If you haven’t seen the ad, you can watch it right here:

But the 2 men aren’t just playing friends on TV!
Yes, the commercial presented a picture of what could be, but the relationship between these two men actually has actually blossomed! No, they did not know each other before meeting on the set of the commercial—but the rest, you could say, is history. The two men have now struck up a real-life relationship.

Why is friendship so important?
The immense popularity of this ad seems to indicate that the world is hungry for connection and conversation, contrary to what we might be led to believe. And that it starts as we know it often does. Simply, between two people or smaller groups—between friends.

Rev. Gary Bradley (an actual vicar in London) and Zubeir Hassam (principal of a Muslim school in Leicestershire, England) continued their connection even after their work on the TV spot was done, became friends, and then sat down together, again, to discuss their participation in Amazon’s commercial and their newfound friendship.

Both men expressed humble astonishment that the world was paying such close attention:

This is good stuff
The point here is not that we—or you—necessarily agree with everything that either or both of the men said as they chatted about their relationship, the point is this: conversations can occur—even about spiritual things—but they won’t occur without, as the vicar said, “getting on with each other.”

But we have to “get on with each other” and cultivate relationships—friendships—in order to make spiritual discussion even possible.

Certainly at Q Place, our desire is that the spiritual conversations taking place would, in time, grow beyond mere interfaith dialogue and friendships. It is our prayer that in the Lord’s perfect timing, we would see many men and women come to experience the saving power of Jesus Christ—but we also know that making new disciples has to start with simple “interfaith friendships” and “getting on with each other.”

What does it look like to “rejoice in each other’s company,” and start “with the little things” as the men talk about here?

Clearly they have established a beginning, and are both insistent that their friendship, trust and dialogue will continue.

You can begin these kinds of relationships
“Like learning how to ride a bike or ride a car, learning how to relate to people, especially those unlike you, calls for a change in your perspective. You need to experience it—not just learn about it, hear about it, or talk about it.” (The 9 Arts of Spiritual Conversations, ©2016, Tyndale)

And you don’t have to get cast in a commercial to begin. Every day presents opportunities for us to begin new relationships and invest in those we already have. Who do you sit next to on the train? Who’s in the cubicle next to yours? Across the hall? In the elevator? At the gym? In the bleachers?

9 simple practices will help you
Noticing, Praying, Listening, Asking Questions, Loving, Welcoming, Facilitating, Serving Together, and Sharing are all simple practices—or Arts—that build a foundation of relational trust and open the gateway for conversations about God to unfold naturally.