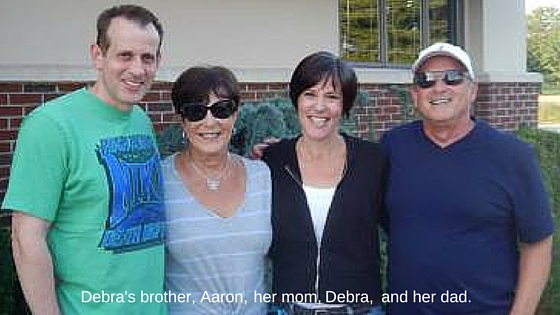 When various people from various calls of life all “happened” to arrive at a Whole Foods  grocery store near Superior, Colorado, at about the same time one day, none of them expected they would get out of their respective cars, cross the parking lot, and find a woman, collapsed next to her cart, sobbing.

Deborah Greene was just on her way out of the store with her groceries when her phone rang. She paused to answer it and that’s when her brother told her that their father had killed himself.

Eleven months later, after grappling with the guilt and trauma so often associated with suicide loss, Deborah felt compelled to go public with her grief and thank those who stopped to surround and support her. Her thoughts, first written in her blog, soon went viral. I became aware of her story through my own Facebook feed via the Washington Post not long after. In her “open letter to the Whole Foods shoppers who consoled me when I learned of my dad’s suicide,” she describes her predominant memory:

And you kind strangers, you were there.

You could have kept on walking, ignoring my cries, but you didn’t. You could have simply stopped and stared at my primal display of pain, but you didn’t. No, instead you surrounded me as I yelled through my sobs, “My father killed himself. He killed himself. He’s dead.” And the question that has plagued me since that moment came to my lips in a scream: “Why?” I must have asked it over and over and over again. I remember in that haze of emotions, one of you asked for my phone and asked who you should call. What was my password? You needed my husband’s name as you searched through my contacts. I remember I could hear your words as you tried to reach my husband for me, leaving an urgent message for him to call me. I recall hearing you discuss among yourselves who would drive me home in my car and who would follow that person to bring them back to the store. You didn’t even know one another, but it didn’t seem to matter. You encountered me, a stranger, in the worst moment of my life and you coalesced around me with common purpose—to help. I remember one of you asking if you could pray for me and for my father. I must have said yes, and now when I recall that Christian prayer being offered up to Jesus for my Jewish father and me, it still both brings tears to my eyes and makes me smile.

What a testimony to the power of noticing. And every single day, every single one of us has the ability to do so. We have eyes to see. We have ears to hear.

But we also have the power to decide if we will allow what we see or hear to interrupt our day.

It is so easy to pass by on the other side.