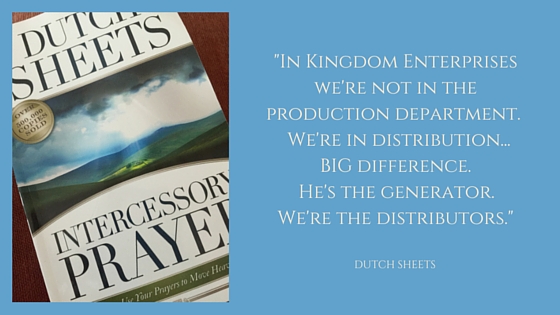 On a moonlit night in a tiny, remote village in Guatemala with a handful of people looking on, author and speaker Dutch Sheets heard the unmistakable voice of God speaking into his heart with very specific instructions to pray, right then, in the name of Jesus, for the healing of a little, insane, village girl who spent her days tied to a tree. He promptly asked God, “What is Plan B?”

In his book Intercessory Prayer, Sheets describes how his faith began to rise as he went along with God’s “Plan A” to pray for the little girl, realizing that “The emphasis is not on me in this situation, but on the one who sent me. I am simply His spokesman delivering this little girl; my prayers release the work. I’m only a distributor of what He has already produced. Be bold, sent one. Enforce the victory!”

From that moment on, his life changed forever as a new concept emerged for him—that of “Jesus and me.”

The following excerpt is from that same book, and in it, Sheets beautifully elaborates on how prayer is the “me” part of that reality.

Yes, He set the little girl free.
Yes, the village turned to Christ.
Yes, Jesus prevailed through a sent one.

So the partnership goes on—God and humans. But the correct pattern is critical; My prayers of intercession release Christ’s finished work of intercession.

His work empowers my prayers—my prayers release His work.
Mine extends His—His effectuates mine.
Mine activates His—His validates mine.

In Kingdom Enterprises we’re not in the production department. We’re in distribution…BIG difference. He’s the generator. We’re the distributors.

I think this makes us His co-laborers. What do you think? I think Christ is awesome and wants us to be “awesomites.” Humble awesomites representing His awesomeness, but awesome nonetheless. More than conquerers! Christ and His Christians, changing things on the earth.

There are many wounded and hurting individuals “tied to trees” around the world. You work with some, others live across the street. One of them probably just served you in a checkout line, seated you in a restaurant or served you food. Their chains are alcohol, drugs, broken dreams, rejection, money, lust…well, you get the point.

Plan A is for supernatural but ordinary people like you and me to: (1) wholeheartedly believe in the victory of Calvary—to be convinced that it was complete and final, and (2) to rise up in our role as sent ones, ambassadors, authorized representatives of the Victor. Our challenge is not so much to liberate as to believe in the Liberator; to heal as to believe in the Healer.

Plan B is to waste the Cross; to leave the tormented in their torment; to scream with our silence, “There is no hope!”; to hear the Father say again, “ I looked, but found no one”; to hear the Son cry once more, “The laborers! Where are the laborers?”

Come on Church! Let’s untie some folks. Let’s tell them there is a God who cares. Let’s represent—let’s mediate—let’s intercede!

On Q was pleased to be introduced to this book when Q Place President, Mary Schaller, shared it with team members in Chicago right before Christmas, telling the staff that it would greatly inform Q Place’s prayer focus in 2016. On Q will feature more from it in the months ahead.