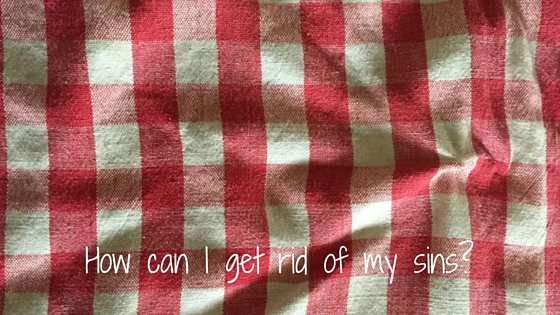 The other day, I was manning a booth for our church at a local “Taste of…” event when a middle-aged guy came up and asked me, “How can I get rid of my sins?”

Right then, I suddenly realized I didn’t like any of my answers to that question. I had officially lost my elevator speech. I fumbled and danced around the issue, partly because he was clearly baiting me.

He was obviously a Christian guy who, for whatever reason fancied himself the Chicagoland doctrine police, and I felt like he’d thrown down the gauntlet, and here I was, with no shield and sword to protect myself.

So he was baiting me, but also I realized most of the pat answers that were rattling around in the darkest recesses of my brain were pretty dusty, and were no longer resonating with me.

After this guy left, feeling like he’d trumped me with his question, I found myself wrestling with shame that sprang from my apparent inability to put Peter’s command to “always be prepared” into action, but more importantly thinking, “Wait a minute. What was that supposed to accomplish?”

Was he supposed to be representing the seeker to me? If so, he failed. Honestly, what’s the likelihood that any modern seeker would EVER ask that question? I’d say it’s about zero.

But after he was long gone (of course) I came up with the perfect response.

If he had been a seeker, and if that “seeker” had actually asked that very unlikely question, “How can I get rid of my sins?” I could have simply done what Jesus would have done, and asked him something back.

I could have engaged him in a spiritual conversation. My question could have been the beginning of building an authentic exchange comprised of listening and understanding. Our talk over the table at the food tent that day could have opened up the possibility of building trust through dialogue and genuine interest. Maybe we could have even grabbed some food—it was the “Taste of…” after all!—sat down at one of the red checkered tablecloth covered tables and eaten together. Maybe we’d become “friends.” And over time, be able to talk even more deeply. I could pray for him in his wrestlings and take note of what was really important to him.

In these ways, I could have loved him.

And at any point in those “could haves,” God could have led me to the response to his question that would have really hit home…and who knows what could have happened next.