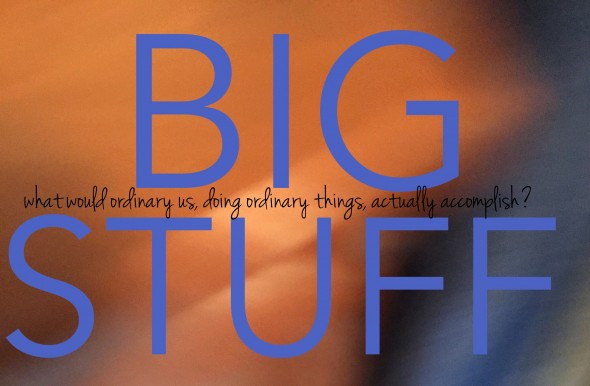 We don’t change markets, or populations, we change people. One person at a time, at a human level. And often, that change comes from small acts that move us, not from grand pronouncements. – Seth Godin

We love the big stuff. The star athletes and celebrities. The crowds. The grandiose events. In 2011, well over 24 million people watched Prince William marry Kate Middleton. And that was only in Great Britain! The estimate for global TV viewership of the spectacular 2012 Olympic opening ceremony in London was 900 million people. According to Nielsen ratings, Super Bowl XLVIII in 2014 started with 108 million viewers and peaked during the halftime show at 115.3 million! My favorite? The big game seven of a championship series and the game-winning, last-second shot that takes it all!

We often carry this perspective into how to spread our faith, with big outreach events featuring celebrity preachers and a polished approach. We admire the evangelists who can “close the deal” with the all-important sinner’s prayer…on an airplane at 30,000 feet…with the whole row…of atheists.

The Christian culture has embraced the mindset that evangelism should be done by the experts, the gifted, the professionals and the pastors; the theologians, apologists, Masters of Divinity; the Bible-answer-men and women. The rest of us can cheer them on, set up chairs, and throw a few bucks in the offering.

I have a friend who calls this the “Barry Bonds” mentality. Despite the controversial steroid scandal that clouded his career, Bonds was an outstanding baseball player. He played 22 seasons (1986 – 2007), received seven National League MVP awards, fourteen All-Star selections, and is considered to be one of the greatest baseball players of all time. An exceptional hitter, Bonds finished his career with the most home runs in baseball history. Bottom line, Bonds was elite. If you needed a home run, he got the call.

In the church, the “Barry Bonds mentality” translates to our admiration for all-stars and professionals who spread the good news about Jesus—not with a little base hit, but a flashy grand slam while the rest of us look on. And look on we should, because, let’s be honest what could we do?

There’s no way we’re capable of the extraordinary!

What would “ordinary us” doing “ordinary things” actually accomplish?

Ordinary is boring, ineffective, and inconsequential.

What if ordinary counts and really is what’s extraordinary?

For reasons I’ll never fully understand this side of eternity, God believes in me and you—not just the champs and Barry Bonds—and the ordinary, daily ways we can impact His Kingdom and share the Good News. Not only does he want us in the game, He’s hand-selected you as one of his starters.

Let that soak in.

You are His first string, His A-Team, His top choice. You are not created to sit in the bleachers and watch someone else play. You are not His B-Team or last choice. God has “ordinary you” in the game, in a critical role in His redemptive plan to reconcile the world to Himself. You are on the court, part of Team Great Commission, equipped to make the shot. Or shots. Just like this team manager did for the team he served so faithfully for so long.

I love it! And I hope watching it encourages you.