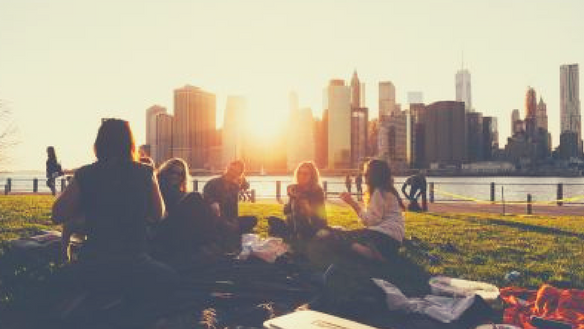 Today, the Western world is increasingly skeptical of institutional Christianity. But an invitation to explore God and the Bible with a few others is a great first step for people who are unlikely to step through the doors of a church. Facilitating these small group communities is an honor and privilege and is also a rich, holistic approach to evangelism that Jesus’ followers of all levels of maturity can participate in.

And they have always been part of the church.

Small groups were an integral part of the early church structure. They were small enough to allow individual members to minister to one another, use their spiritual gifts, and be discipled in the teachings of Christ. In addition, they were vibrant and life-giving communities where evangelism could take place as unchurched people watched a loving and compassionate community in action.

Together
When Dr. Charles Davis, former executive international director of The Evangelical Alliance Mission (TEAM), ran a computer search on the Bible for the singular word disciple and followed up that search for the plural, disciples, with few exceptions he found that the word was overwhelmingly used in the plural. Davis doesn’t feel that this should surprise us at all, writing,

Jesus did not have meetings with each of his disciples separately, lining them up on his Outlook Calendar and allotting each thirty minutes in a closed room. The disciples were learning to follow Jesus together, and generally when he spoke, he spoke to all of them. One notable exception to this pattern occurred when Jesus spoke to Peter on the beach after the resurrection, but generally, each of them was learning of and from Jesus in a group with other disciples who were also learning of and from him.

If someone famous is in a room and everyone moves closer to him or her, they can’t avoid getting closer to each other in the process. The closer they press toward that person, the closer they draw toward each other. In the same way, the closer each of us draws to Jesus, inevitably the closer we draw to each other. We learn from him together, we follow him together and we love one another together. (Making Disciples Across Cultures, InterVarsity Press, © 2015, p. 41)

Investing deeply
Jesus is our model for creating God-honoring, life-changing community. Yes, He spoke to the masses, but Jesus’ primary ministry here on earth came via an invitation to twelve ordinary Jewish men. As you well know, Jesus invited them into community with Him to learn and grow together as they followed Him. Rather than mass-producing disciples, Jesus chose to invest deeply in a handful of people, developing committed followers.

Following
There’s a reason that disciples are called followers. Dr. Charles Davis describes a time when he heard a Nigerian bishop speak on the version of the Great Commission given at the end of the Gospel of John:

After reminding Peter three times to feed his sheep, Jesus says, “You must follow me” (Jn 21:22 NIV). The bishop suggested that the American emphasis on Matthew 28 to “go into the world” has evolved into a “go-and-fix-it” paradigm, as if we were the ones in the lead, bringing Jesus with us. He admonished us to remember that the great commission in John is the command of Jesus to “follow him” wherever he goes. Jesus is already there, inviting us to follow him, so that he can introduce us to others.

Today, when we follow Jesus’ pattern of starting small groups, we can participate in the beautiful work of disciple making, becoming a better follower and walking alongside others as they explore doing the same.

Doing what Jesus did
Jesus knew that the Kingdom of God was all about relationship; relationship with Him, His Father, and with each other. He also knew that a small group would be the best place for those relationships to flourish.

This is still true today.