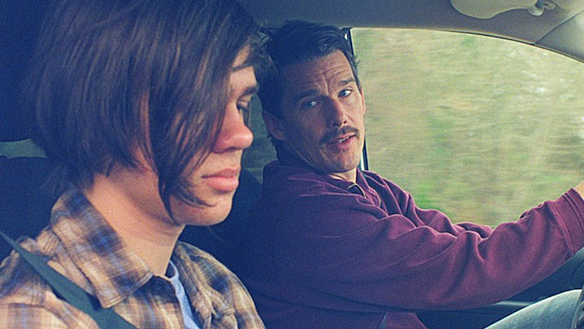 One of the most widely acclaimed movies of 2014 was Boyhood, the story of a young boy named Mason growing up in Texas in a broken home. By the time he is a teenager, his formerly deadbeat dad has turned his life in a positive direction and now has a new wife and baby.

For Mason’s fifteenth birthday, his step-grandparents give him a Bible engraved with his name. He smiles politely and thanks them. In the next scene, you see Mason holding the Bible on his lap unopened as he and his older sister sit in a church–probably for the first time ever–along with the dad, stepmom and step-grandparents.

Later that day, when the conversation turns to the upcoming baptism of his dad’s new baby, Mason asks whether his dad had done the same for him when he was a baby. His dad laughs, saying he hadn’t given any thought at all to Mason’s soul back then.

Obviously curious?
It’s obvious that Mason is slightly curious about spiritual things. It’s also pretty clear that his dad is ill-prepared to have a conversation about God, even when the subject comes up quite naturally. In the film, Mason and his sister, Samantha, even wonder out loud if their dad is now one of those “God people.”

What if the dad in the film had been able to share a little of his own story–how he used to be an absentee father and broken man but was now becoming the one that God wanted him to be?

Even two adolescent kids were able to see a new stability and joy in their dad’s life that begged for at least some kind of explanation.

Would it make a difference?
Maybe, just maybe, because of the brokenness, dysfunction and poor parenting they had been privy to in the past, Mason and Samantha were curious about the faith component that changed their dad.

The love and acceptance the two received from their step-grandparents and step-mother (who sure seemed to be Christ followers) had to have made a strong impression on them, too.

But sadly, dad let the moment pass and missed a chance to share his own faith story.

How true this often is of so many of us.

Are you willing?
Yet we need to let others into the stories of how God has worked in our lives! If we have experienced the power of the gospel, know the priceless value of our own relationship with God through Jesus, and have a genuine love for those with whom we are in relationship, we need to be willing to take the risk and share with others.

If we believe that Jesus can meet the deepest needs of people we know, isn’t it possible that our simple redemptive story and God’s story can intersect their story?

As Sara Van Opstal, executive pastor of Grace and Peace Community in Chicago says, “Proclaiming the good news of freedom in Christ is not for professionals; it is for the willing.”