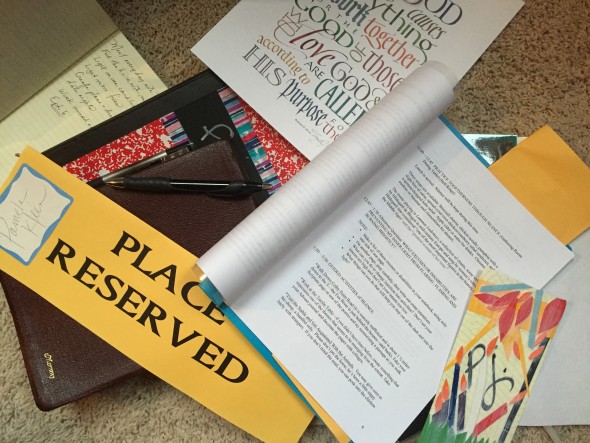 When it comes to sharing your faith, do you ever feel like you don’t have anything to share? Nothing to give? Nothing to say? Tapped out? Empty? This is certainly true for me (maybe more than I’d like to admit), but recently, I think I’ve gained a bit of insight into why.

Just the other day I went on my first—ever—silent retreat. It’s true. Despite the decades behind me, I’d never been to one. So why this time? Why all of a sudden? Desperation. I admit it. I was quite frankly at the end of my rope. Busy. Too busy: frazzled, chaotic. Something had to give so when I saw the opportunity for SILENCE presented by a friend, I jumped at the chance almost without thought.

Still, I tried to avoid it as the day drew near. Did I really have eight hours to just be silent? To do nothing? Isn’t that just the opposite of what all we busy people need? We need more hours in a day, not hours to fritter away! Could I really afford it?

And so I went.

Something urged me on. Hmmm. Wonder Who that could be!

It was actually on my hour-long drive to the retreat that it struck me that maybe the belief that I have nothing to share about Jesus is rooted in a bit of hard reality: I don’t abide enough with Him. That familiar verse from John 15 flooded into my thoughts:

“I am the Vine, you are the branches. When you’re joined with me and I with you, the relation intimate and organic, the harvest is sure to be abundant. Separated, you can’t produce a thing.”

Well, I got there.

And intentionally slid a few things back to the front burner! The day was just what the Lord and I needed. We caught up with each other. (Ok. Maybe more me with Him.) We did lots of things together. (see the photo.) It was good.

Spending focused time with God doesn’t disappoint! Whether it’s for minutes each morning, moments throughout the day or on those special occasions like a retreat, He always meets, fills, teaches, loves me. It’s always good! It’s worth sharing! And the sharing’s natural because it’s natural to share good things!

On an amazing night about two thousand years ago, there were some shepherds who were forced to stop and spend some time with the Lord. And what happened next because they did, isn’t surprising:

“Seeing was believing. They told everyone they met what the angels had said about this child. All who heard the sheepherders were impressed” (from Luke 2, The Message).

Seeing is believing. And that seeing will make you want to share. But we must spend time with Him in order to see. I’m pretty convinced that sharing the gospel in words or with deeds is natural and virtually unstoppable when I just stop and experience Him.

I just don’t stop enough.
Do you?
We can each choose to.

During this advent season I urge each of you to stop long enough to consider what the sheepherders saw: God’s glory ablaze! A Savior! Good news and great joy!

And just like God met the shepherds on the hillside and everyone gathered around the manger and me during my silent retreat, Christ the Lord will meet you and you will see and you will believe and He will become real for you again.