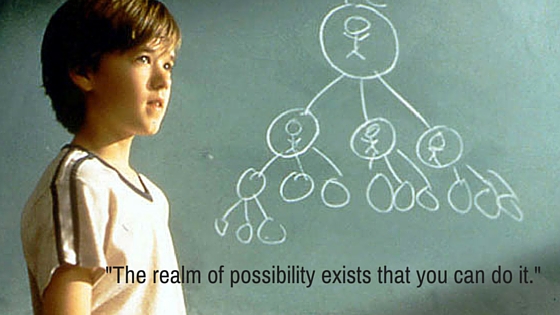 In the opening scene of the movie Pay It Forward, a 7th grade Social Studies teacher is talking to his students on the very first day and asks his class, “What does the world expect of you?”

One student responds, “Nothing.”

Teacher asks another question: “What if you don’t like what the world is? What if it’s a big disappointment?”

Another kid responds, “Then we have no chance.”

But the teacher believes the students can grab control and make something of the world; they can flip what they don’t like over and literally turn the world upside down.

That’s when he gives them their year-long extra credit assignment: to think of a world changing idea and act on it.

No one can believe this!

But the teacher insists, saying: The realm of possibility exists that you could do it.

That’s when one young student creates a plan for “paying forward” favors, and ends up not only changing the life of his struggling single mother, but also sets in motion an unprecedented wave of human kindness which, unbeknownst to him, will blossom into a profound national phenomenon.

Some critics bashed the movie when it came out years ago, others praised it. Me? I found it inspiring.

Christian, the realm of possibility exists that you can do it.

And our Teacher, Jesus, is challenging us to change the world and act.