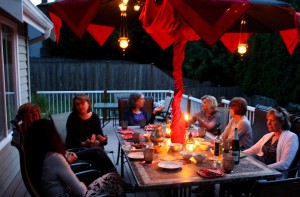 Not too long ago, my book club met to discuss The Red Tent. Published over a decade ago, it’s a fictional story that uses the brief biblical story of Jacob’s daughter, Dinah, as its jumping off point, unpacking what life was like from the women’s perspective in ancient (biblical) culture. The “red” tent was designated for the women to gather during “that time” for rest, encouragement, and deeper conversation. That’s precisely what the book did for us, “throwing up the sash” on our own religious backgrounds and experiences.

It’s been said if you want to get into an argument, just start a conversation about religion or politics. But here was the beauty of my book club: there was no argument.  No one tried to convince anyone of anything—rather, everyone took a turn to simply tell of their own experiences. Our discussion was full of respect for each of our backgrounds and the continuing questions that religion raises about faith.

Author Scott Peck defines “true community” as a state when individuals in a group enter a place of complete empathy with one another and people have “emptied themselves” of the need to change the other people. It was beautiful to see and experience.  And it’s increasingly rare.

Somehow, we’ve lost the ability to have deeper conversations and deal with disagreement. Community as Peck describes has been vastly impacted because we don’t quite know what to do if we don’t see eye to eye on legalized pot, gay marriage, or even the latest local school levy.

But what is the difference between disagreeing and casting judgment? Disagreeing is simply having different convictions and beliefs about a certain issue. Judgment occurs when we think less of someone who thinks or lives differently that we do, or we think more highly of ourselves because of it.

When Caitlyn Jenner introduced herself and when our Supreme Court ruled in favor of marriage equality, my Facebook and Twitter feeds instantly lit up with proclamations and opinions on both sides of the issues. Is social media really the best forum to talk about these things?

In a recent social media course I took, my classmates and I were tasked with assessing various social media strategies. Time and time again, the #1 problem with social media was all talking and no listening.

Talk about a good analogy about the breakdown of community in our country.

How do we welcome discussion on all sides of often difficult and sensitive issues? How do we go beyond the one-way proclamations of social media? So often it’s not our opinions that foster conflict, but how we express them. So often we spend far too much time talking and not enough listening.

Personally, I’ve been on a long journey of learning that it’s so much less important that others know where I stand, than it is for me to know what’s meaningful to them so that I can best know how to respect and love.

My book club friends and I have invested in one another for many years. We’ve created a climate that can handle deeper conversations.

What would happen if we resisted espousing our opinions on social media, and instead invited a neighbor over for a simple cup of coffee? And just listened.