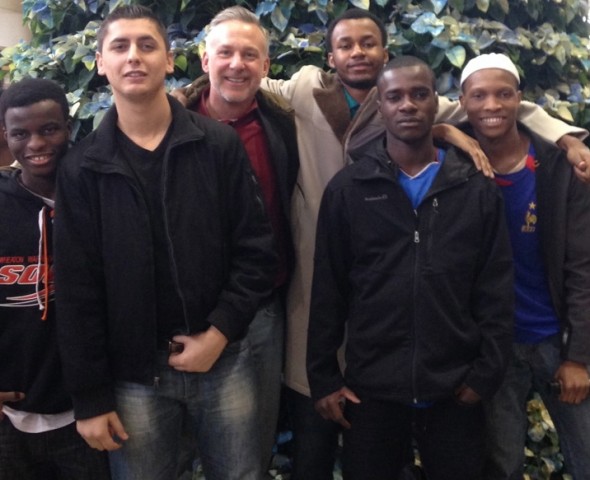 “You are the salt of the earth. But if the salt loses its saltiness, how can it be made salty again?…. Neither do people light a lamp and put it under a bowl. Instead they put it on its stand, and it gives light to everyone in the house. In the same way, let your light shine before others, that they may see your good deeds and glorify your Father in heaven.”
– Matthew 5:13-16 (NIV)

My buddy Scott and I invited four of the young African refugee men we mentor to come with us and pack beet seeds for people living in poverty in Zimbabwe. In the car on our way, our chatter was easy, talking about our privileges and blessings compared to life in their home countries and refugee camps. When we arrived, we entered a room bustling with people of all ages. Together we watched a compelling video about the people who would receive the seeds, listened to the instructions, and got ready to work. As energetic music played in the background and the host announced which team was ahead in filling seed packs, our team pushed harder and harder.

Finally the ending bell rang, the seed packs were counted, and our team went wild at the announcement: we won! The guys were exuberant—together we accomplished something meaningful.

During the drive home, I asked the guys some questions about the experience. Soon I discovered what they enjoyed, what they learned, and what they found most meaningful. I also asked them about their religion’s beliefs on compassion and serving. In turn, they began to ask me about my faith. Who was Jesus to me as a Christian compared to who He was to them?

I shared parts of my story, emphasizing that I began my spiritual search when I was about their age when I needed to understand my beliefs for myself, not as the faith of my parents or my peers. Then, I encouraged them to do the same—to explore their faith for themselves, and not just view beliefs as cultural or biological as they headed toward adulthood. Our conversation soon turned to other things but I marveled how God had opened up this opportunity—serving together had opened the way.

Serving together with people who believe differently has the potential to raise curiosity for what makes a Christian’s life different. Serving together can be an equalizer: those who serve and those being served are both humbled. And as we serve alongside people who don’t yet know Jesus, they experience the difference Jesus has made in our lives. By God’s grace, they will see His character shining through us.

How might the act of serving together help you connect with people in your life who don’t yet know Jesus?